Chilean Mills and their Origin

When you talk about ore crushing machines that crush ore from 1” minus down to fine powder, the earliest ones that come to mind were probably Arrastras. These machines may have first been used in Mexico, since the word is Spanish, meaning to drag along the ground.  They were made by laying a circular track of stone that were level with a low wall around the outside of the track. They had a center post made of wood cut off at the required height and another small timber cut to make a horizontal arm. There would be one or more stones tied to the arm; and the stones would be drug around the basin by donkey power that would grind the ore to a powder. This mill would not process large amounts of material since you were relying on animal power that may not be reliable.

The mill was later replaced by a modified arrastra that was referred to as a "Chili" mill that was probably initially used in Chile. This mill had a similar arrangement of a round base, but they replaced the sliding stones with two round stone wheels fabricated from a hard material like granite. The wheels were driven from an overhead geared mechanism that was powered by water wheels, pelton wheels or steam engines. The gold is saved by means of quicksilver on the bottom of the mill, in the same manner as in the arrastra. This configuration was eventually referred to as a "Chilean" Mill.

To improve on this principle the stone wheels were replaced with 3 to 6 heavy cast iron wheels that rode on a circular iron basin about 3 foot in depth. The rest of the design did not change much, but this was a significant advancement on the crushing machines of that time period. This mill would release the gold concentrates through a trough to a sluice table and probably on to a shaker table to remove most of the gold ore. Mercury was also used on this system on the sluice table.


As noted above the arrastra was a type of primitive mill used to crush ore and extract gold and silver. Miners hauled ore to the arrastra, where it was placed into the basin to be crushed. Once the ore was broken down into small pieces, the operator would pour mercury into the basin, continue grinding, rinse out the rock fines, add more mercury and repeat the process. After the ore had been totally pulverized they would then do a final rinse and removed the mercury amalgam gold mixture,  and use a retort to vaporize the mercury and then melt the gold down into dories.

There were many styles of Arrastras constructed over the years, but the one below was an excellent reconstruction of an actual arrastra that was located in the same place back in the day. It is an overshot waterwheel that runs the arrastra called the Flood & Hindle Arrastra that operated on Willow Creek. Water that was diverted from Willow Creek turned the large waterwheel to provide power. A drive shaft connected to the wheel rotated a series of cogwheels that in turn dragged stone around the basin, crushing the ore. This operated here along  Willow Creek, Circa 1890. 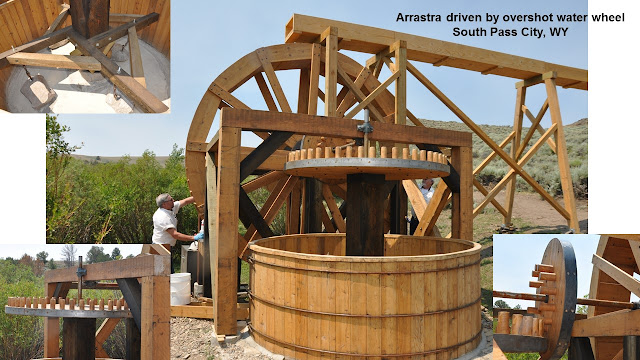 An example of an early single stone wheel Chilean Mill was discovered when we toured Australia and New Zealand in April 2014 to investigate stamp mills in both countries. We found several stamp mills that were still in operation in museums in both countries, which is the subject of my other blog posts.

While touring the south eastern areas of Australia in the State of Victoria we came upon a recreated mining town called Sovereign Hill. This was a very authentic recreation of an 1900’s town including mining aspects of that era. They had a 10-stamp mill powered by a steam boiler of that time period. It also powered a very large Cornish pump that was quite impressive.
The Chilean mill below was set up in the main area of the town and shows the type of crushing machines that existed back in the day. 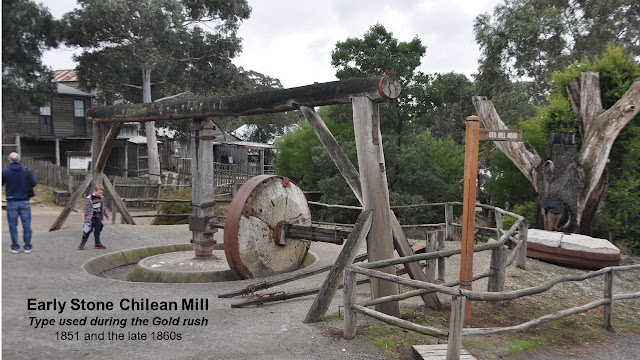 We toured the East Coast and went to the Reed Gold Mine near Midland, NC to look at Stamp mills. While we were there we saw many parts to Chilean mills, including numerous granite wheels and granite bases. There were no assembled Chilean mills, but there were plenty of parts as noted below.


We toured the Engine Millhouse that housed at various times over the years Arrastras, Chilean mills and stamp mills. There was not much left in the engine Mill house except for the base of a Chilean mill and the boiler chimney. The operations were from 1854 to about 1899 according to the historical data. The mill house evolved over the years as the mining processes changed. The drawing below shows the location of the various components locations. 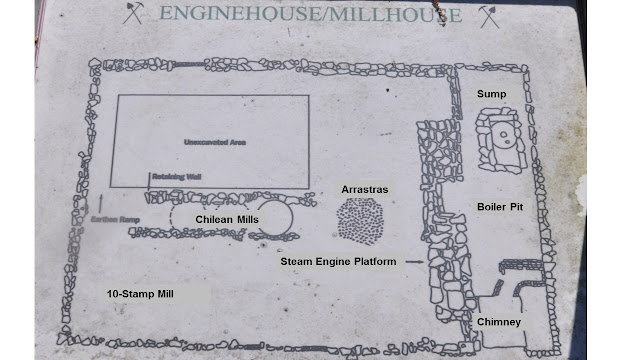 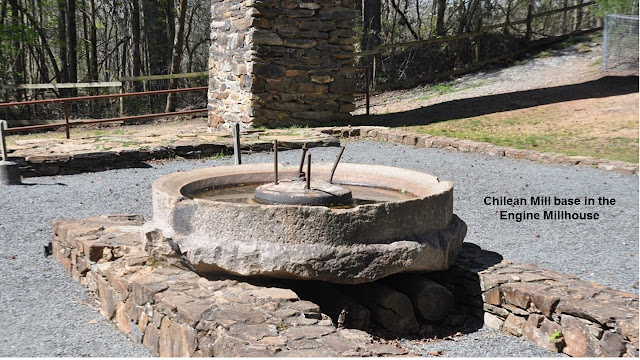 
We drove about 20 miles north of the Reed Gold Mine in Midland, NC to Gold Hill. It was a small town with a lot of mining related equipment throughout the local area. There was a small park and in the park was access to a Mine shaft and a double wheel Chilean mill that was totally assembled with all of the gears and pulleys in place. There was a 16" pulley where a motor could be attached and the mill operated. The mill was in good condition and could run. The picture below shows the double granite wheels and the granite base that the ore would be placed in to be crushed. It also shows the gear and pulley system that turned the wheels. 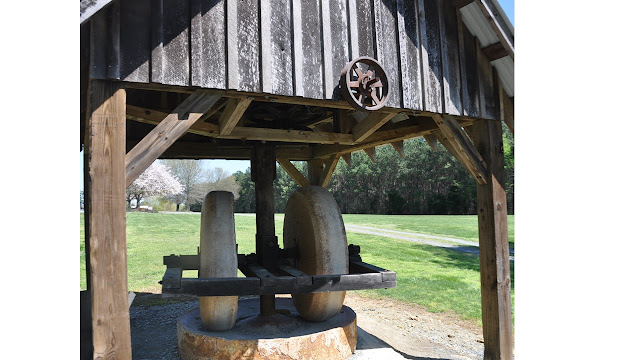 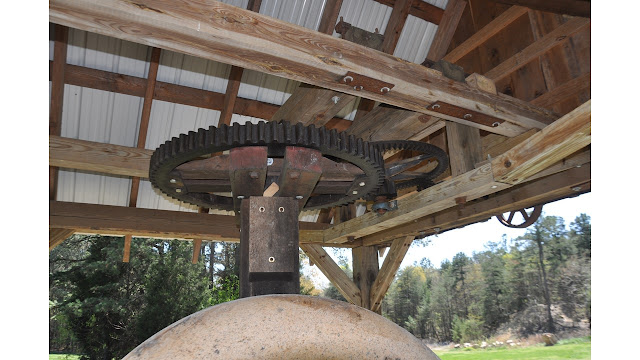 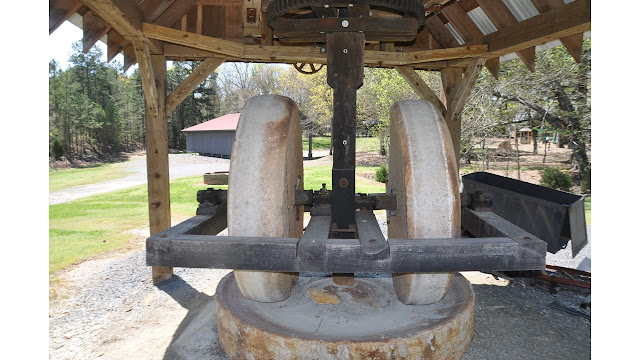 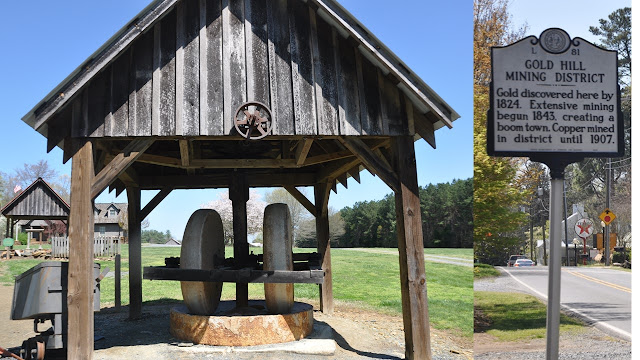 LATER CHILEAN MILLS
Chilean Mills evolved over the years as technology improved and mining techniques advanced. There were at least two major changes to the later Chilean Mills. The first was to use cast iron wheels in place of granite and the process would go from a batch process to a feed and bleed process. The early mills would process the ore in batches. They would feed amounts of ore into the crushing area and after they had enough concentrates adequately crushed they would add the mercury and allow amalgamation to take place. Once they were satisfied that all of the gold had combined with the mercury they would flush the trough out and remove the amalgam and retort it, separating the gold from the mercury. This would stop the process while the amalgam was being removed.

The later models would use the cast iron wheels that were superior to the granite and would more efficiently crush the ore. The stones would wear down faster and also were subject to breaking. They also set up the machines to automatically feed the mill and also as the material became crushed fine enough the material would be passed on to a sluice table, Muller pans, and Wilfley tables. This would classify and separate the concentrates so the gold could be removed and melted down into dories.
The Chilean mill below is a later model that has the automatic feeder, cast iron wheels and gold claiming devices on the outlet of the mill. The slide below shows the progression of the ore being processed to remove the gold. 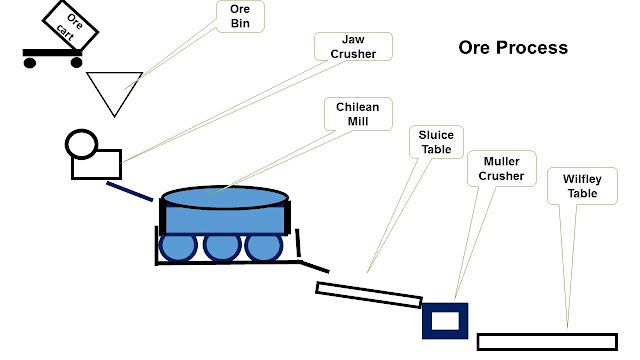 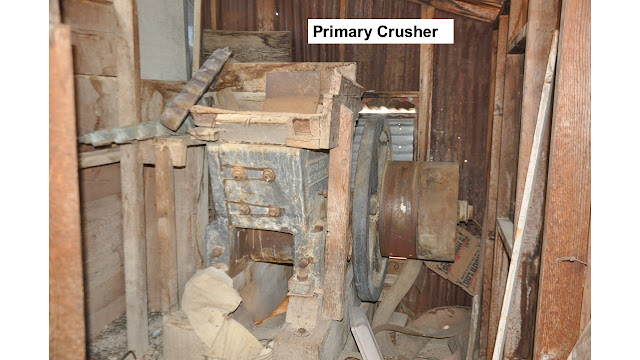 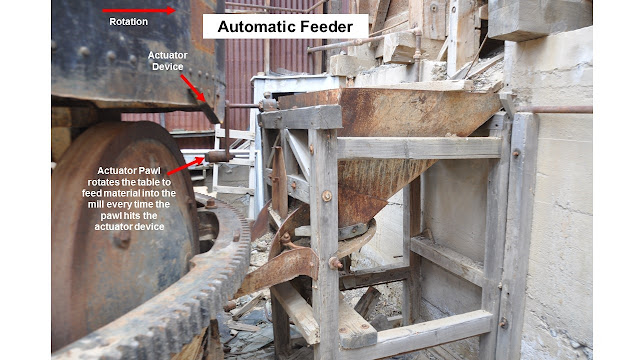 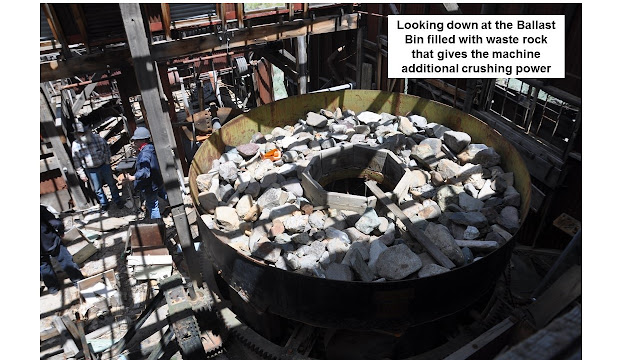 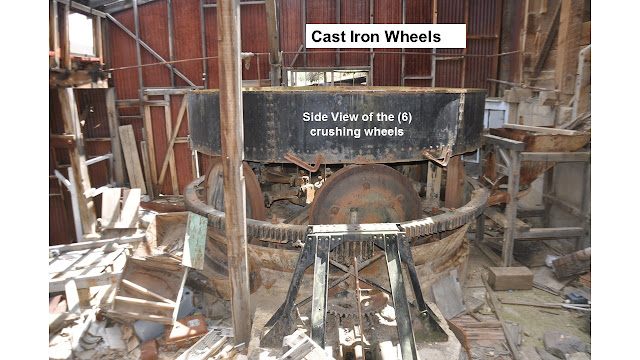 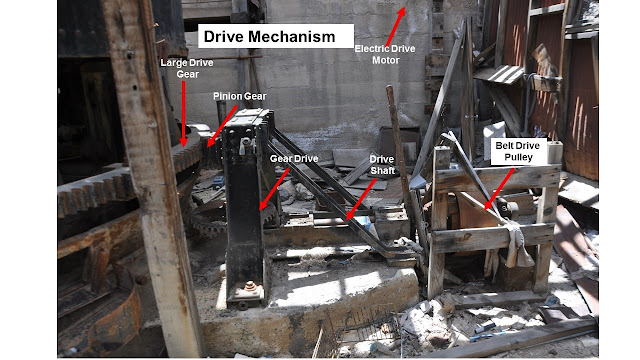 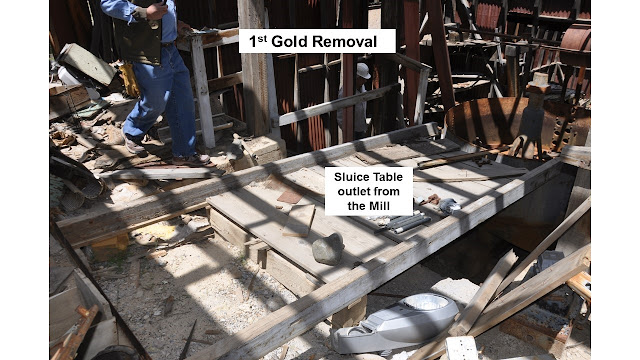 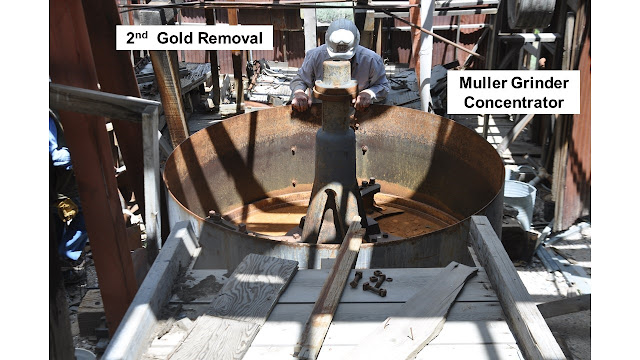 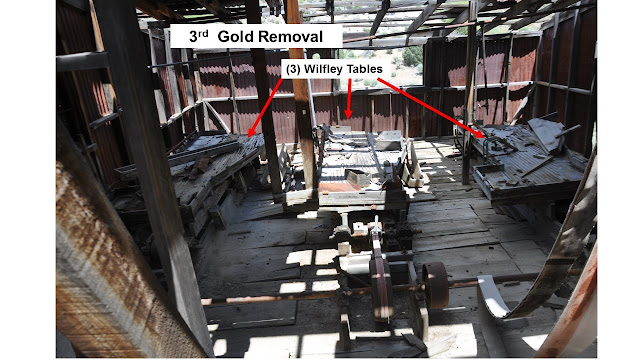