TRAMWAY INFORMATION
Tramway Locations There have been significant aerial mining tramways in many western states including Arizona, California, Idaho, Montana, Oregon, Nevada, New Mexico, and Washington. We will only be discussing the tramways in Arizona at this time.
Why Tramways?  Many mines were located in mountainous areas with terrain that would make it very expensive and difficult to develop access roads from the mines to the millsites. Mine operations could also be affected by other conditions, such as weather, that could impact the operation including rain and snow. This would make the tramways an important factor, especially since many mines were built a distance from the millsite or location where the ore could be processed. That is why mines with the above conditions would consider installing a tramway to get the ore from the mine to the millsite.
Developmental History Tramways were developed in the US from about 1870 through the 1920s. Like many other mining developments the tramways started out simple and used a single cable. This was one wire rope made into a continuous loop that would transport the tram buckets from the mine to the millsite, using gravity or a steam mechanized system. One of the early individuals was Andrew S. Hallidie. He was instrumental in developing single rope tramways that could move the ore from the mine to the millsite. Later, Adolf Bleichert in the 1880s, developed the double-rope tram that was superior to the single rope tram system. This system had 2-wheeled carts that ran on heavy stationary cables and a second lighter traction cable that ran in a continuous loop that provided the motive force for the system.
Information Sources for this Article There are very few books written or historical information on mining tramways that I could find. There is one book that stands out and that is “Riding the High Wire Aerial Mine Tramways in the West”, by Dr. Robert A. Trennert. This book is a virtual gold mine of information on mining tramways. It is thorough with its discussion of the history and locations of mining tramways in the west, including Arizona. He mentions some that I was aware of and many that I did not know. He was a professor of history at Arizona State University and served as a past president of the Mining History Association.  I found that he still lives in Arizona, so I called him and had a very nice discussion on how he got into this obscure topic. I asked him why he wrote the book and he said that there was very little information specifically on mining tramways and he wanted to make readers aware of the importance of these mining related components.
Next I talked with some local mining individuals that are presently located in areas where there were tramways. The first contact was Mike Christi, who lives in Crown King, Arizona. Mike owns the Fairview Mine, the Mill Restaurant and is a mining history buff of the Crown King area. By the way, the Mill Restaurant is built around a 10-stamp mill and serves excellent food. It is well worth the ride up the old Bradshaw Mountain Railroad track bed to visit Crown King, a hot spot of mining and mining tramways. Mike mentioned two tramways there were not in Dr. Trennert’s book. I also spent some time at the Geological Survey office in Phoenix, Arizona to obtain basic information on tramways in Arizona.

ARIZONA TRAMWAYS
There were over two dozen tramways documented in Arizona, from the 1890s to the 1990s, but only a few were noteworthy. Many other states such as California, Idaho, Nevada, Colorado, Wyoming, New Mexico and Utah had tram towers. The following locations used tramways for conveying ore from the mine to a Millsite in Arizona:
NOTE: I will only list the tramways with basic information on each of the tramways. The detailed information on many of these delivery systems is contained in “Riding the High Wire Aerial Mine Tramways in the West”, by Dr. Robert A. Trennert.
Blue Bell Tramway Mayer, AZ, circa 1920 (copper) The Blue Bell Mine was serviced by the Bradshaw Mountain Railway and owned by the Consolidated Arizona Smelting Company. The ropeway was approximately 3 miles long. The mine produced copper, silver, iron, silicon and gold.
Bat Cave Guano Tramway Grand Canyon, AZ, Circa 1950 (bat guano) A 10,000 foot aerial tramway operated in the 1950’s at the Grand Canyon during the 1950’s known as the Bat Cave Guano Mine operated by the U.S. Guano Co. to extract bat guano from a natural cavern at the western part of the canyon. This information was obtained from Dr. Trennert’s book.
Virginia Chief Tramway Cabezas, AZ Circa 1901, Huson design single rope. Copper?
Old Dominion Copper Tramway, Globe, AZ Circa. 1891 (copper) Trenton Iron Works 1,224 feet with a drop of about 100 feet transfer cost about 9 cents per ton vs. 20 cents by wagon, gravity operations. This tramway proved that you did not have to have a long conveyance to make a profit. It only had 11 buckets that carried 800 pounds capacity. This information was obtained from Dr. Trennert’s book.
Copper King Mine Company Clifton, AZ, Circa 1891 The two mile tramway was constructed between the mine and the smelter in 1891 and shortly after starting operations it collapsed.
Mammoth-Collins Tramway San Manuel, AZ Circa 1897 (gold) utilized returning buckets to supply water to the mine from the San Pedro River.
Desoto Tramway Crown King, AZ Circa 1904 The Desoto mine located near the Bradshaw Mountain Railway used a ¾ mile aerial double rope tramway to transport material from the mine to the railway.
Wild Flower Tramway Crown King, AZ circa 1917 Silver / Gold. The tramway was reported to be located in Crown King and over 1 mile in length according to Mike Christi.
Silver Queen Tramway Crown King, AZ 400 to 500 feet long. Mike Christi did not have a lot of information on this tramway.
Christmas Camp Tramway Mine in Gila County, AZ 3,600 foot tramway. Over the mines life there were actually two tramways in operation over the years. The first was 3,600 fee and the second was 7,300 feet. It was reported that the mine operated up until 1977.
Orphan Mine Tramway Grand Canyon1950s, The material mined was high-grade-uranium on the South Rim of the canyon. There was about 1,800 feet of cable between the Grand Canyon’s South Rim and the Orphan Mine. The tramway was used from 1955 until the miners drilled an elevator shaft to the ore body in 1959.

Discovery There were no tramways that I knew of in Arizona that were still standing. Most of the tramways only have some concrete foundations that are still in existence. I was very surprised when I found the GRMT tramway in the mountains, north of Cave Creek while restoring a 10-Stamp Mill that was donated to the Cave Creek Museum. The tramway is mostly on BLM land and is surrounded by “private” patent mining claims that makes access or viewing of the towers impossible. That is probably why they are still at the location. I happened to notice one of the towers off in the distance while removing parts of the stamp mill from a private patent mining claim. The people that donated the stamp mill to the museum owned the patent where the millsite was located. At first we were busy with the restoration of the stamp mill. It was not until a few years later that my interest peaked. The picture below shows the tramway as it presently exists. 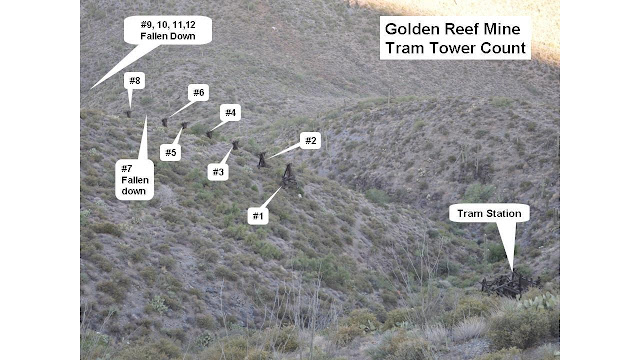 History I could not find out much information on the tramway. I did find some information on one of the concrete tower bases that had a person’s name and the date 4.1.13. I’m assuming that the towers were built on that date and it pretty much fits in the mining activities during that time. There was a total of (12) towers initially and a station at each end. The total length of the tramway was about 1,500 feet and went in an east- west direction. This was not a significantly profitable mine, but someone was interested enough to spend a significant amount of money to build the ore conveyance device. History books mention some disputes with investors that ended up in a gun battle. There is some speculation that this was a mining scheme to get money from investors. The tramway fed ore to the stamp mill through the 1,500 ft. tramway. The tramway was manufactured by Trenton Iron Company, Trenton, New Jersey

Tramway Status There is only a part of the station’s ore bin at the mine end and only concrete bases at the stamp millsite end of the tramway. There are (7) towers still standing in various degrees of degradation. There was no other items such as tram buckets in the area. We tried to get permission from the BLM to bring (2) of the towers down to the museum to display as artifacts. They would be displayed with the 10-Stamp Mill that has been restored back to operation. BLM would not release any of the towers to the museum.

The picture below shows a close up of a typical tram tower. 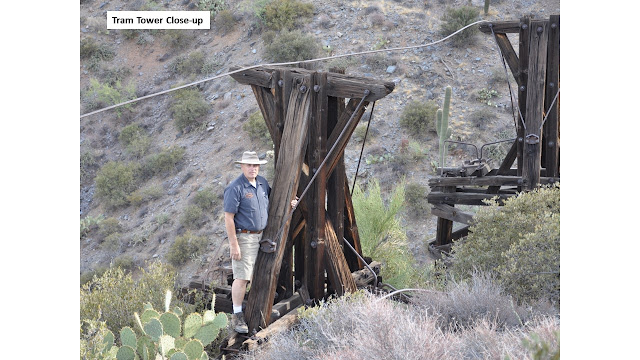 The picture below shows the tram station at the mine site. 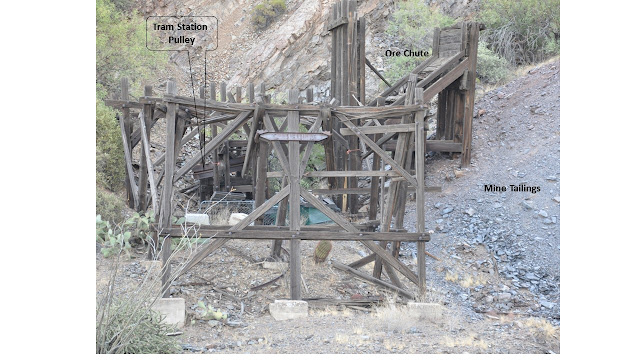 Reconstruct two tram Towers We wanted to construct two towers at the museum and actually suspend a tram bucket between the two towers and operate the system. We took the dimensions from the existing towers. As I said in the beginning, most of the towers were on BLM property, but there were (3) on the patent “private land”. We got the hardware from those towers that could be used on the new towers with permission from the land owners. The original existing towers were questionable as far as strength to perform their function on an operating tower. We have received a complete tram bucket with its mounting frame from a local resident that will be used on the tramway.

The drawing below gives a designer's view of what the tramway would look like when completed. 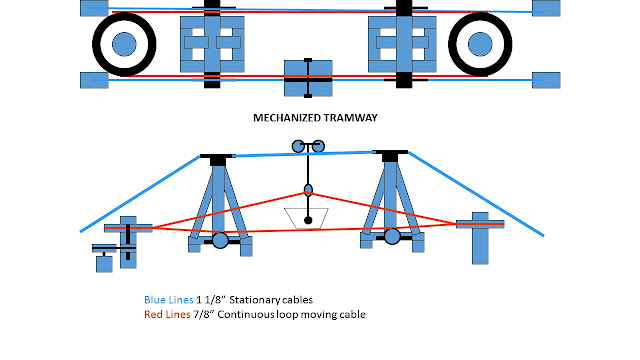 Presently, we are trying to obtain funds to construct the towers at the museum. Like most museums today there is not a lot of funds to build the system, but we will continue to save up to purchase the timbers for the tramway. Once this is completed I will place the display on my blog.