The Phoenix Mine is located in the Cave Creek Mining District in Arizona about 35 miles north of Phoenix. It was one of the largest stamp mills in Arizona at 100 stamps and powered by a 200 Hp Corliss Steam Engine. Today there is nothing left of the original millsite. The area is known as Spur Cross and where the mill was originally it is now a paved parking lot. There is a shaft in the area, but I heard it has been closed off. It is worth while to show you the pictures of the mill taken in 1893. The pictures below are property of Cave Creek Museum, Cave Creek, AZ 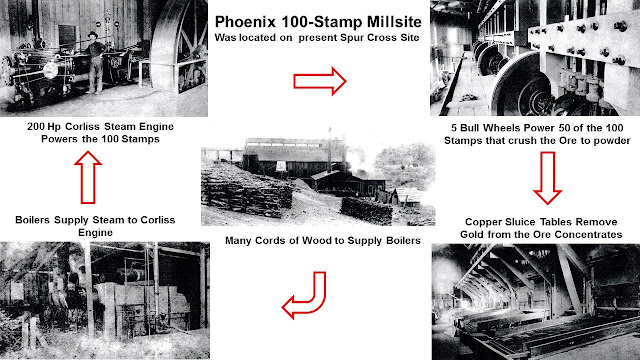 I have put together a report on the cost of operations of the mill in 1914 taken from “Arizona Geological Survey Mining Data” for the Phoenix Mine. Before I give the report I would like to extend some information on the value of gold and currency between 1914 and 2020 below:

PHOENIX MINE
Formerly Cave Creek Gold Mine and Bully Cave Gold Mine
March 1914
NOTE: This document was taken from “Arizona Geological Survey Mining Data” for the Phoenix Mine.

Posted by Charlie Connell at 7:20 PM No comments: